In the Sunshine We Rode the Horses 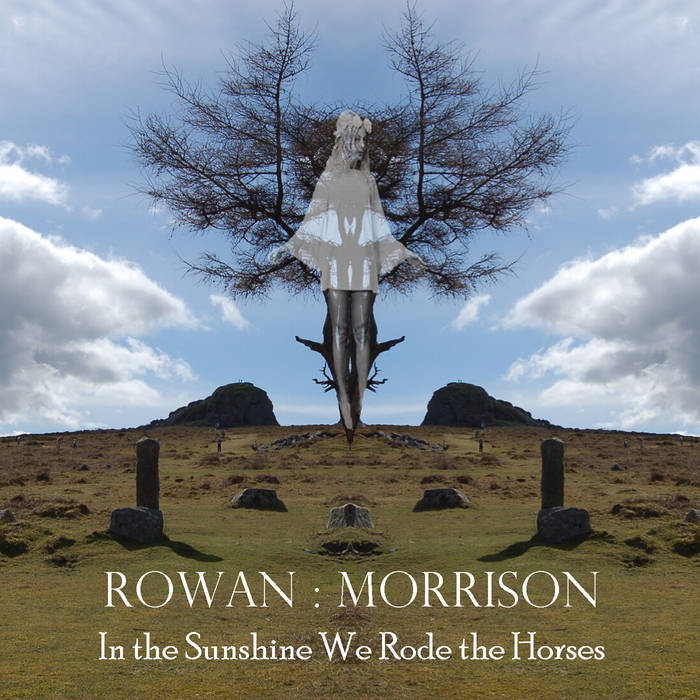 A seventeen track album by Rowan : Morrison. (aka The Rowan Amber Mill and Angeline Morrison).

The album explores themes of our beautiful natural surroundings, and how the pursuit of profit guides us to learn 'the cost of everything and the value of nothing', paving the way for the scarring of the landscape with fracking, HS2, retail parks, and so on...

This is explored in the album's narrative, which takes a snapshot of an imagined history of the land. It explores the conflict taking place at the same area (The Ridgeway) through time periods between the land and man with their developing technologies. These events take place throughout time, from pre-history through to the near-future. In a very 1970s "Play for Today" sort of way, they start to bleed into each other as over time, the earth begins to enter a period of hibernation to heal itself from the destruction wrought upon it.

"An epic meditation on ideas that the pagan folk genre often hints at, but has rarely articulated as fulsomely as this, a rising up of nature against the modern age of property development and fracking. ****/5". Shindig Magazine.

"With any album the music is more important than the packaging, but sometimes the packaging is so good it just has to be mentioned. The CD version of this album comes in a small metal tin no less, with three badges, a sticker, three prints and a lyric booklet on very high quality paper. It's a real object of desire for the music collector. It's as ambitious as the packaging and as successful, with vaulting orchestrations, hypnotic vocals, and powerful words richly evoking the natural world and its beauty. ****/5". RnR Magazine.

"It’s a shame that as a self-released album coming so late in the year that this will miss so many of the best-of lists but then this is a beautifully packaged yet somehow understated album destined, it seems, for “lost classic” status, to be rediscovered and cherished by generations of pilgrims on the old straight track. Somehow we think they would approve." Terrascope Magazine.

Since 2007 The Rowan Amber Mill have been purveyors of Woodland Folkadelica/alt-Folk. Releases include: "folk devils & moral panics", "midsummers" and "Heartwood". The Book of the Lost (with Emily Jones). Silent Night Songs (with Angeline Morrison).The folk horror collection Harvest the Ears. The synth album Follows Shortly (as Making Tea For Robots). They are half of Rowan:Morrison. ... more

Bandcamp Daily  your guide to the world of Bandcamp